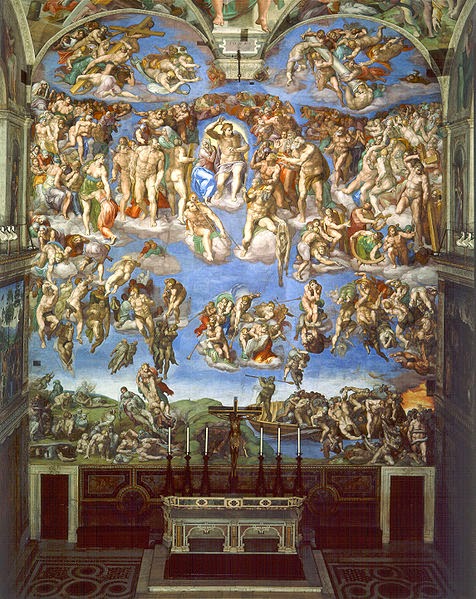 Collect for the First Sunday of Advent

“Almighty God, give us grace to cast away the works of darkness, and put on the armor of light, now in the time of this mortal life in which your Son Jesus Christ came to visit us in great humility; that in the last day, when he shall come again in his glorious majesty to judge both the living and the dead, we may rise to the life immortal; through him who lives and reigns with you and the Holy Spirit, one God, now and for ever. Amen.”

Maybe you have heard the old (is it old?) Anglican “joke” of telling someone “Happy New Year” on the First Sunday of Advent. November 29th (well technically, the evening of November 28th) does indeed mark the beginning of a new liturgical year. It’s a cute (maybe trite, for some?) reminder of what can be (or become, if we let it) a deeply meaningful truth: we Christians live by a different Calendar. The Prayer Book calls it “The Calendar of the Christian Year” and introduces it this way:

“The Christian Year consists of two cycles of holy days. The first is the Paschal Cycle, which follows the lunar calendar and identifies the first Sunday after the full moon that falls on or after March 21 as Easter Day. (Easter Day cannot occur before March 22 or after April 25.) The season of Lent precedes Eastertide and the Season after Pentecost follows it. The second cycle, the Incarnation Cycle, follows the solar calendar and places our Lord’s birth on December 25 (Christmas Day) with the season of Advent preceding it. The season of Epiphany follows the twelve days of the Christmas season (Christmastide.)”

Notice what the whole calendar revolves around: Jesus. The Paschal Cycle centers our attention on Easter, the holiest feast we celebrate. The saving life, death, and resurrection of Jesus occupies the place of prime importance. The Incarnation Cycle centers on Christmas, focusing our attention on the glorious mystery of God become flesh for our salvation. Following the Christian Year is a way of rehearsing the Gospel over and over again, allowing it to retune our hearts and our attention to the complex of events that forms not only the center of the biblical narrative, but the center of cosmic history itself.

I think that living by the Calendar of the Christian Year (that is, actually attempting to live out the vision of life that our Prayer Book commends, rather than merely noticing that “oh now it's the purple season” without a second thought) becomes more necessary the more our culture secularizes and the more its cultural calendar clamors for our fealty. You may have heard of “Christmas creep”: “a merchandising phenomenon in which merchants and retailers introduce Christmas-themed merchandise or decorations before the traditional start of the holiday shopping season, which in the United States is on the day after Thanksgiving.” (Wikipedia). In my All Saints Day sermon a few weeks ago, I mention a similar phenomenon regarding Halloween: it has grown to become a season unto itself, displacing All Saints Day. This week I noticed yet another instance of this trend: Black Friday. A car commercial declared it was “Black Friday All Week”, and Cyber Monday (a term invented as recently as 2005, further evidence of what one might generally call “commercialization creep”) is just around the corner. All things being equal, I am a fan of saving money and of economic growth. But I wonder if sometimes we miss what might be going on underneath all of the advertising: the false god Mammon demanding our worship, and we unwittingly acquiescing.

Through this cultural haze our Collect bursts, like a lighthouse through a dense fog, guiding our hearts and minds home to consider weightier matters: the cosmic battle between darkness and light that wages even in our own hearts; Jesus Christ’s first visit to save us; his second, coming visit to judge us; “life immortal” and the reality of eternity; and what makes this all good news, the grace of God. The Collect is unique, not just among the Advent Collects, but among all the Collects in Anglican tradition. When the revisers of the quintessential Prayer Book, the 1662 Book of Common Prayer, came to this Collect, they added a rubric to it: “This Collect is to be repeated every day with the other Collects in Advent, until Christmas Eve.” This prayer serves to set the tone for all of Advent, and thus in some sense for the whole Christian Year. It does this by training our attention on some of the things that matter most: the Gospel, eternal life, grace, and the end of history. May our hearts, minds, and actions be retuned this Advent to a Gospel key, so that our celebration of Christmas is all the more meaningful. Amen.

More in The Cross and Crown

More by The Reverend Ryan Landes