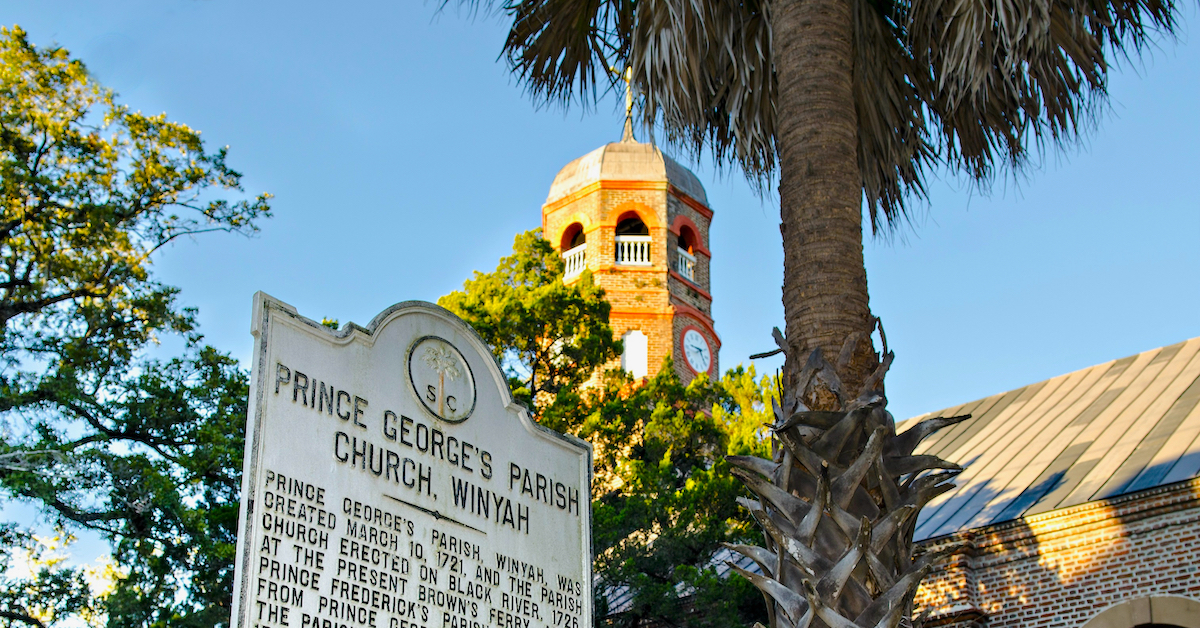 The Parish of Prince George, Winyah, is the church that was built into the community. Formed in 1721, Prince George is one of the few original church buildings in South Carolina dating to the colonial period that has served continuously through the ensuing years for the worship of Almighty God.

The Parish of Prince George, Winyah, was formed in 1721 from St. James, Santee, Parish. It was named for Prince George who became George II of England. The first building was on a bend in the Black River about twelve miles north of where Georgetown is now situated.

As the rice planters become more numerous along the coast and the anticipated port of entry came closer to reality, the parish divided in 1734. The original church fell within the newly established bounds of Prince Frederick’s Parish and therefore commissioners were appointed to build a new church for Prince George Winyah Parish. Bricks were collected as early as 1740 and the first rector, sent by the English Society for the Propagation of the Gospel in Foreign parts, held the initial service in Prince George on August 16, 1747.

The church was not completed until 1755. It was incorporated in 1788. It was desecrated both during the Revolutionary War and the War Between the States. A gallery and the chancel were added around 1809 when repairs were made after the Revolution. The steeple was added in 1824.

The box pews in the church were customary in colonial churches. Since there was no heating system available, pew owners frequently brought charcoal burners to their pews in cold weather and the box pews retained the heat.

The stained glass window behind the altar is English stained glass, originally in St. Mary’s Chapel at Hagley Plantation on the Waccamaw River - a chapel that had been built by Plowden C.J. Weston for his slaves.

Colonial churches did not have stained glass windows. The windows on either side were installed earlier in the twentieth century. Still remaning in the church are four old hand-blown glass windows with many of the original panes of glass.

Prince George is one of the few original church buildings in South Carolina dating to the colonial period that is still in use today, and has served continuously through the ensuing years for the faithful in their worship of Almighty God.